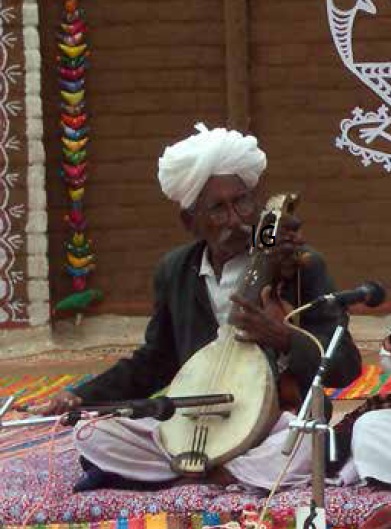 Aruna was invited to listen to the music of western Rajasthan, Rupayan Sansthan Borunda, by  Komal Kothari ( Komal da), in the early 80’s. She shared her love for this extraordinary music with Bhanwar Gopal( Bhurji), Shankar , and  the SWRC communication team. Thus began an exciting period of learning from Rupayan and Komal kaka/da about the variety and richness of the Rajasthani folk tradition. In  January 1984, the SWRC decided to hold a “Lok Utsav” in Tilonia, to celebrate the music, performance and theater of people of Rajasthan. This elaborate and intense set of performances was founded on appreciation and respect of traditional artists, performers and musicians. It set the tradition of the Lok Utsav, which located the music in the midst of people who understood and grew up with this tradition.Komal da was present at every Lok Utsav till he died in 2004. A team of Aruna, Bhurji, Shankar, Ramniwas and music lovers, gradually came to understand not only the music but the socio-economic conditions of the artists.

This community of human beings sustained the tradition of the Lok Utsav – to create space for the expression and appreciation of the best in the Rajasthani cultural tradition.

© 2016 Khamayati. All rights reserved.
An initative of School for Democracy & Digital Empowerment Foundation
The site is powered by eNGO Network.