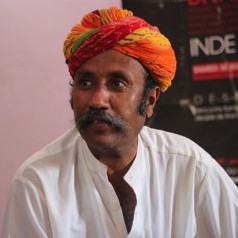 Anwar Khan is a professional Manganiar musician who is one of the leading vocalists of folk, Sufi and traditional music of western Rajasthan. His intelligence in establishing communication with audiences from varied cultural backgrounds, understanding and tradition, the correctness of his lyrics and his commitment to inter faith worship, lends richness and depth to his rendition. He is best known amongst his community and deeply respected forhis ability to work with and train young talent.Anwar can scale ragas with as much ease as he can sing the earthy notes of a fast tempo folk song. He has to his credit, performances with many leading maestros of Indian classical music; such as Vishva Mohan Bhatt (Mohan Veena , North Indian Classical), Shashank (Flute, Karnatic Classical Music)and many others. Traveling the world, he has played with Yehudi Meuhuin and other world class musicians. He is capable of telling a simple folk tale, as easily as he can present the intricacies of his musical tradition. He continues to sing for all occasions such as weddings, births, and festivals, keeping his roots alive. His repertoire includes Sufi poets such as Bulleh Shah, Latif, Kabirdasas well as Surdas, Meerabai, Tulsidas, and bhajans. In other words an ‘USTAD’ in his form of traditional music. His management skills make him an excellent organizer. He belongs to village Baiya in Jaisalmer district and now continues to live in Barmer.
The newspaper Hindu has this to say of him: “An exclusive community of Rajput folk musicians, the Manganiyars make music that is eclectic, free, transcending barriers of language and religion, reflecting the same reverence for Krishna and Allah, using the dholak and kamaicha with unique vibrancy. Anwar Khan Manganiyar's deep-throated delivery refracts folk radiance as well as a strong base in classical music.“