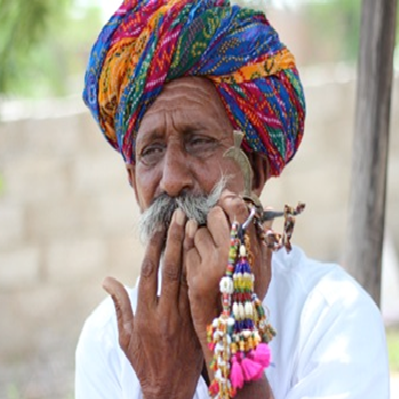 Malaram belongs to a nomadic caste Gawaria who sell bangles and other cosmetic products in villages. He adopted playing an autophone instrument called Morchang (Jaw’s harp) which he learnt from his father. Having performed in multiple cities like Bangalore, Calcutta, Mumbai, Delhi etc, MalaramGawaria plays Morchang most fluently. His rendering of the highs and lows of tones is effortless, which is a challenging task for a Morchang player. He plays for occasions such as festivals, fairs and concerts. The tunes which are played on a morchang are folk tunes which were composed by shepherds who used to play when they took their cattle for grazing.