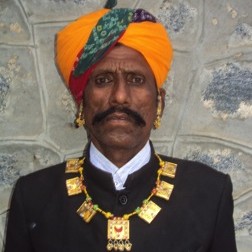 Gazi Khan, is an exceptional musician, with a rare voice, and sings softly and in the lower octaves. His voice may often get lost in the group, but those who hear his solo performances, go back with a special memory. His style with pronounced “gamak” is reminiscent of south Indian classical music, but it blends well with the folk or sufi context of his songs. He is acknowledged as one of the extraordinary vocalists of the community. He is an exponent of darbari music (court music). Gazi,inherits his musical tradition from his mother, which explains the difference in his rendition from the others. He is also an expert singer of Sufi, Meerabai, and Kabirdasbhajans.

Like Anwar he has travelled far and wide, performing with many leading maestros of Indian classical music and others.He has played with YehudiMeuhuin and other world class musicians.

Gazi Khan is the original composer of a very popular song well known as ‘Nimbuda’ which was used in a Bollywood movie without acknowledgment or giving him copyright.